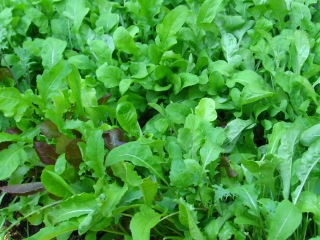 This summer’s early cool temperatures have morphed my small orderly garden into an unstoppable sea of arugula.  I’m not complaining― the kale, chard, red leaf, and dainty mesclun blends will all survive.  The fact is, this wacky bumper crop has further inflamed my passion for the arresting arugula.

Now I can be even more selective in scrutinizing every seductive, leggy candidate competing for my next plate.  However, I’ve noticed my neighbors’ eyes are beginning to roll when plied with more generous overtures of arugula.

It seems I’m not the only one that’s wild about arugula, though.  I have resorted to cruising the web in search of arugula tips and ideas―and there are plenty of them.  My wanderings have uncovered an amazing assortment of arugula facts and tributes.
For example, arugula is an herbaceous annual plant with tender green leaves that are smooth, sharply indented, and irregularly shaped, like those of dandelion.  Its piquant flavor is similar to water cress;  as a member of the cabbage family, it is related to watercress, mustard and radishes. Also called rocket, it is particularly popular in the south of France, Italy, and in Egypt.
It’s interesting to note that in Roman time’s arugula was grown for both its leaves and the seed. The seed, also used for flavoring oils, has been used as an aphrodisiac since first century, AD. (Cambridge World History of Food).   A typical Roman meal might include a salad of greens such as arugula, romaine, chicory, mallow and lavender, all properly finished with a ‘cheese sauce for lettuce’.
As far as I’m concerned, arugula doesn’t need much company; just a few good companions capable of balancing its assertive nature. With this summer’s gold mine, I’ve resorted to making jars of Arugula Pesto, an amazing condiment dabbed on grilled fish or spread on a BLT sandwich.  I use my basic pesto recipe and substitute traditional basil with several cups of tender baby arugula, trimmed of any bitter stems.

One of my current dishes features marinated cherry tomato salad combined with hot drained penne pasta, gently tossed with arugula, and topped with goat cheese or feta.  Another quick summer-in-a-bowl meal is based on pantry and fridge items: white beans, roma tomatoes, maybe some fresh cucumber, red onion or sweet pepper, kalamata olives, rosemary and arugula from the garden, all lightly finished with garlicky sherry vinaigrette.

When it comes to recognition and tributes to arugula, there’s no shortage of them on the web―and so, it seems entirely appropriate to present my personal favorites, a curious selection, each worthy of an esteemed Arugula Award. 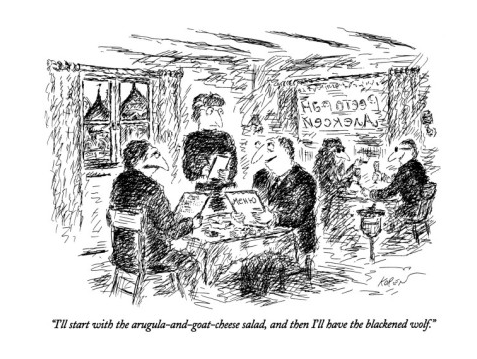 New Yorker Cartoon by Edward Koren
Edward Koren has long been associated with The New Yorker magazine where he has published well over 1000 cartoons as well as many covers and illustrations. He has also contributed to many other publications, including The New York Times, Newsweek, Time, GQ, Esquire, Sports Illustrated, Vogue, Fortune, Vanity Fair, The Nation and The Boston Globe.

Jen’s photos and recipe of Arugula Salad with Figs and Prosciutto are to die for, but she emphatically decries any copying of her work, which she refers to ‘assholery’.  Hope I’m not breaking any laws with my faint praise.

David Kamp has carved out a dual career in “proper” journalism and humor writing: like Calvin Trillin’s, only far less respected and lucrative. His work appears in Vanity Fair, GQ, and the New York Times, among other publications.