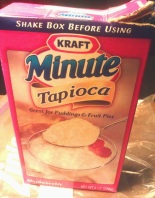 The other day I was blindly pawing through a cupboard and tipped over a long-forgotten box of tapioca.  Fortunately, the potential mess was averted as it was confined to a zip-lock storage bag, so I set it to the back of the counter for later consideration.   That’s the thing about tapioca.  It’s not a staple that I regularly use and it is packaged in a fairly small box that tends to get lost and forgotten.  Even if it’s in line for rotation it is easily squeezed out by the bigger players, unwittingly benched to the back of the shelf.

Unless you are a slave to old-fashioned tapioca pudding or inclined to pie baking, tapioca may carry with it very little value or significance.   I had no clear recollection of why or when I last used it and wondered if it was still good. Later, I took a closer look at the slim classic red and white box, on the top of the box was stamped Nov. 08, 2010.  Hmmm.  I also noted it was microwaveable ‘minute’ tapioca, not the original pearlvariety.  Beyond that, I recalled that it’s advisable to soak the larger pearl tapioca first.  Why? What’s the difference? I puzzled.

I did a little further digging and thanks to Ellen at Ellen’s Kitchen, I found a helpful explanation of tapioca in its various incarnations.   Fact is, it’s a pretty powerful thickening agent known to out-match flour in many sauces and long cooking dishes.  Tapioca comes from the cassava plant’s root system, of which some portions are highly poisonous.  This is a point worth fully researching if you are considering a future in tapioca markets.
It’s a complicated process.  Their preferred roots are ground into a pulp, and then liquefied into a starch that is dried and pulverized again before becoming tapioca flour.   To make pre-cooked pearls, the tapioca flour and water is slowly simmered until it reaches the dried flake stage.  At this point the flakes are milled into recognizable uniform pearl shapes―of which the smallest is the instant or minute tapioca, with its noticeably small pearls. The larger pearls need to be soaked again to soften them for cooking purposes.

Along the way, I also read that tapioca can lose its thickening power if it has been opened too long.  Oops. I decided to ignore the warning, jump right in, and continue my investigation into the mysteries of tapioca.  I passed on the pie idea; I was interested in something a little more outside the box.  I knew I was onto something good when I discovered Judith Fertig’s Lemony Baked Apple Tapioca in All-American Desserts. This is an invaluable resource that celebrates a wide swath of regional sweets, all owning a particular spot in the American landscape of desserts.
Unlike the average tapioca pudding which requires tedious stirring, here apples and tapioca simmer unattended in the oven.  As usual, I made a few adjustments along the way, like substituting ¾ cup brown sugar  for 1 cup granulated sugar and a hint of vanilla in lieu of fresh lemon juice.
This cleverly comes together in a charming pudding with bites of baked apple adrift in nubby tapioca all mysteriously tucked under a golden brown meringue dome.  Best of all,  time did not seem to alter tapioca’s amazing ability to manifest into a thick and tasty pudding.  Now, that’s deliciously entertaining.
Baked Apple Tapioca

Ingredients
2 tart apples, such a Granny Smith or Jonathan, peeled, cored, and cut up
1 lemon, zest

Directions
Preheat oven to 350 degrees.  Butter the bottom of a 2-qt baking dish.  Arrange the apple pieces over the bottom and sprinkle with lemon zest.

In a large mixing bowl, combine the tapioca, vanilla, milk, sugar, and egg yolks.  In a medium bowl, whip the egg whites until stiff.  Whisk the whites into the tapioca-milk mixture until lightly blended.

Sprinkle the apples with the cinnamon-sugar and pour the tapioca-milk mixture over the fruit.
Bake until the tapioca has firmed and apples are soft, approximately 30-40 minutes. (Allow the pudding to cook about 10 minutes after it begins to bubble.)  It will thicken and set as it cools, serve warm.   Yield:   6 or more servings.