When life around you tumbles into chaos, some might argue that cooking is not always the wisest course of action.  My response to them would probably be something approximating, “Well, you’ve got to eat, don’t you?”

That was pretty much the case this weekend.  On Friday, I made a quick dash to the store to pick up a few remaining items necessary to prepare a sultry Moroccan ragu of pork, onion, carrots, butternut squash, chickpeas, enriched with layers of aromatics and sweet spices― all simmered into a state of lush complexity.

Back at home, it was pretty clear that I had a problem with my kitchen sink.  When the faucet was on, water flowed from under the sink onto the floor.   Once I determined the water was no longer gushing, I placed a pan under the sink, mopped up my mess, and debated my next step. Living out in the country is wonderful, but there are a few drawbacks.  Such as: calling the plumber late on a Friday.   Additional scheduling time plus higher house call fees always give me pause.
I sent up an SOS to my neighbor, Gerald, our resident handyman.   As long as I didn’t run water, we agreed that there was no great emergency; he would stop by in the morning with his wrench and we would assess the situation then.


So much for any big cooking plans; they were squelched for the night.  Still in damage control mode, I decided to keep a lid on making any more of a mess than necessary and opted for a simple veggie burger dinner from the freezer.

In the morning, before Gerald arrived, I warmed a loaf of whole wheat soda bread from the freezer,  set out a charming bowl of muscadine jelly, a ramekin of butter, napkins, plates, coffee cups and juice glasses.   Just looking at it made me happy! Yes, food is very therapeutic.
Meanwhile, since my urge to cook was percolating up again, it seemed like the ideal opportunity to begin simmering a pot of chicken stock.   From the freezer, I pulled out a recently frozen roasted chicken, dropped it in a pot of water, and got it simmering on the stove.  What better to time to prep the basic ragu vegetables than while adding the trimmings to the pot?  In went a rib of celery, a pinch of thyme, and a bay leaf, too.   There!  The vegetables were all prepped, tucked back in the fridge, and ready when needed.  Simmering on the back of the stove, the stock smelled divine.  All was well.
It also looked like it I could quickly conjure up the Moroccan pork marinade.  In a blink I had a heavenly blend of ground coriander, cumin, ginger, turmeric, paprika, and pepper, all bound with a hint of lemon juice and a dash of olive oil.   Mmmm, what a mood elevator!
At the market earlier, I had elected to decrease the usual 1-1/2 lbs. boneless pork for a ¾ pound slice of tenderized pork plus a package of sliced cremini mushrooms.  Such a small amount, I might as well cut the pork into cubes add it to the marinade, and store it in a zip lock bag.  Then, I gave it all a good massage and popped it in the fridge.    No muss, no fuss; another step done.


Gerald arrived to a spotless kitchen; we put our heads together, and got to assessing the situation.   Yes, it looked like a clogged drain alright, but peering under the sink he spotted other issues that looked questionable― albeit easily remedied.   Waving his arms wildly, he put forth possible scenarios.   More tools required, more mop up, the day dragged on; the kitchen was slowly unraveling.  By late afternoon, the situation had worsened and Gerald was flummoxed.  When the faucet was on, the sink leaked more than ever and water now gushed from an errant hose onto the kitchen floor.   I thanked Gerald for all his help (sigh) as he dashed out the door shaking his head.  He had football games ahead and a big screen waiting for him at home. 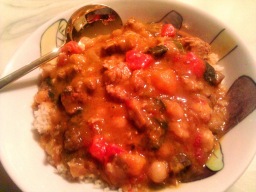 It looked like I had no choice but to call in the plumber; but not today.   I surmised I was safe as long as I didn’t run water in the sink.  I had Moroccan ragu in my future and tomorrow was another day.

Notes about the recipe:  this is a very adaptable concept.  As mentioned, I substituted cremini mushrooms for part of the pork.  Preserved lemons are on my hit list, but for now, I used the lemon as indicated, plus I included the lemon remains to the ragu as it simmered. I also added 2 to 3 cups of chopped chard from the garden with the return of the pork.  Since my ragu had plenty of liquid when done, I thickened it with 2 tablespoons instant tapioca pearls.  It proved to be outstanding thickener. I served it over a simple couscous seasoned lightly with fresh ginger and a bay leaf.  Bliss in a bowl.