Recently I added a new egg dish to my repertoire, when I discovered pounti in Clifford A. Wright’s book Bake Until Bubbly.

He refers to this revelation from the Auvergne region of France as a vegetable flan, which immediately caught my attention because it suggested some sort of quiche—without the crust. But that was only the beginning.

In his version, chard and onion are pureed with a little pork—such as prosciutto; it’s all bound together with eggs, milk (or cream) and flour, then it’s baked in a small casserole. More traditional versions of pounti tend to feature substantial amounts of pork and/or other meats mixed into a melange similar to a meatloaf, then interspersed with a few prunes and baked.

Although I was attracted to Wright’s lighter version, I wasn’t prepared for the mysterious alchemy that takes place. The smidgen of well-minced pork combined with the thick vegetable custard introduces a gentle pate quality that elevates this terrine into something extraordinary. It does not require garlic or an herb blend either; it stands on its own merit. I opted to add a bit more contrast by studding the mixture with garlic sautéed mushrooms— rather than the popular prunes. 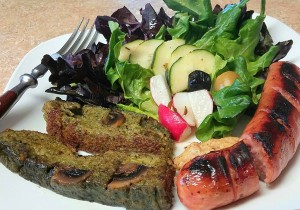 A miserly two ounce portion of prosciutto provided enough richness and flavor to meld with the chard-custard and unleash a mysterious sexiness that left me lurching for more.

I liked Wright’s suggestion to lightly sauté leftover slices in butter. When beautifully browned they are a symbiotic match with plump garlic sausage—along with a dollop of whole-grained mustard and perhaps a green salad.

This will surely give them something to talk about.

Inspired by Clifford A. Wright’s pounti in Bake Until Bubbly

This is not just ‘a vegetable flan from the Auvergne region of France’, but rather a vegetable pate fortified with prosciutto and studded with mushrooms.

Note: The terrine slices appear far more green than the photo here may suggest. When sauteed their color is muted during the browning process.