The old proverb “necessity is the mother of invention” proved itself true again today.  There I was, poised with my tasty, toasted English muffin in one hand and nothing in the other.    What’s a body to do when they discover they are completely out of their favorite jam or jelly? 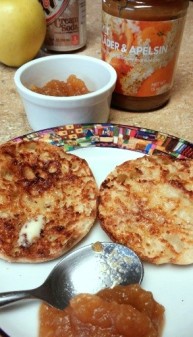 In this case, I was missing my recent delicious find from IKEA, Sylt Flader & Apelsin, or orange and elderflower marmalade.  I cast a forlorn look about and it appeared that any hope would rest in the fate of four fat Golden Delicious apples.

With that as my impetus, I pulled up an old Bon Appetit recipe and went to town.  Here is the original recipe for Spiced Ginger-Apple Butter at Epicurious, with changes, including 4 Golden Delicious apples instead of 4 pounds of McIntosh.

By the way, in my wildest imagination, never would I think to combine A&W Cream Soda with apples.  But what’s a person to do when making apple butter and they are out of apple cider?

Add another juice or liquid, of course.  I suspect my weakness for cream soda comes from the vanilla addition.    Turns out, the claims of aged vanilla proved positive; it delivered a “subtle, nuanced flavor” that complements the layers of ginger, lemon, and apples.