I dropped by one of my favorite stores today to pick up a few specialty items. It’s always fun to plan a weekend visit, because the folks at Roth’s Market in Silverton go out of their way to feature tastings and innovative offerings.

Out front, they had their usual grill area set up cooking off their notoriously fantastic burgers—the smell is enough to draw you in and seal the deal.  As I skirted past the crowd to make my way into the store entry, I caught a whiff of another oddly familiar smell that jerked me around and took me back outside again.  It made no sense, but clearly, I was downwind from an unmistakeable cloud of roasting hatch chile peppers!

Yes, indeed, behind the tent of barbecuing burgers, a roaster was gyrating about searing and tumbling the elusive, elegant, elongated hatch chile peppers. 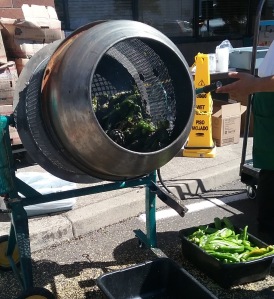 A team of three was busy removing and bagging them as fast as they could for waiting shoppers.

Shades of New Mexico and Austin! How could this happen? The lady ahead of me carried off 10 pounds of peppers; she clearly knew what she was doing. 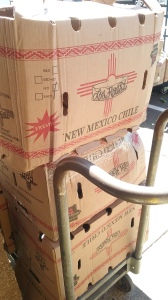 Apparently the word is out: that small window of opportunity called hatch chile pepper season is upon us, right here in Silverton, Oregon.

If you have not experienced these amazing peppers now is the time, and it will not last.  That is why people in the know, freeze enough of the freshly roasted peppers to last them an entire year.

Of course hatch chiles are amazing on burgers, for more information and ideas on these marvels, check out earlier posts:

The Land of Enchantment