Cream of tartar is one of those odd little pantry ingredients that many of us haven’t a clue what it really does. Beyond stabilizing egg whites when making meringue, what really is its value?

While contemplating a slew of Snickerdoodle recipes recently I was stumped that many included cream of tartar as an essential ingredient. Turns out cream of tartar is an acid that causes a reaction when combined with baking soda. The leavening effect results in soft, chewy, addictive, cookies that you simply cannot leave alone. 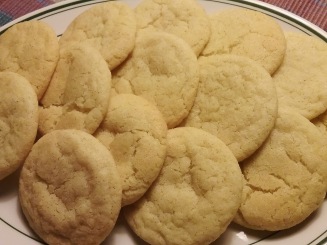 In some circles Snickerdoodles are viewed as an American institution. With such lofty status no wonder they are added to commercial ice cream, as if frosting on a cake.

Their powdery cinnamon-sugar finish makes them iconic, too, so don’t omit.  Since many recipes are quite lavish on that count, the following amount of cinnamon may seem wimpy by serious aficionados.  From my limited perspective they are balanced and need nothing more than a cup of tea or a glass of milk.

One thought on “Behind the Curve?”