If you are a fan of pain d’epices, the classic French sweet bread made with honey and spice, then here’s a version that will make your head spin. Part of the appeal of the pain d’epices loaf is that it is designed to improve with age. However, once you’ve had a bite of one, it’s unlikely that will ever happen. 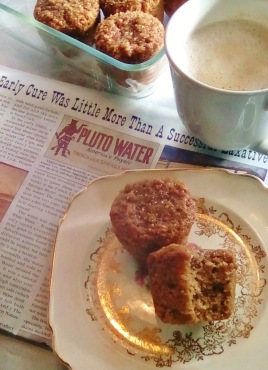 These smaller, personal sized cakes receive their distinct identity from an enticing blend of spices featuring aniseed and compounded with rye flour.  The healthy dose of honey adds enough richness and moisture to make it hard to believe they contain not a whit of butter or oil.

This particular Spanish twist comes by way of David Lebovitz and his great blog of the same name.  The cakes are one of a fascinating collection from  Chef Daniel Olivella in his new cookbook, Catalan Food: Culture and Flavors from the Mediterranean.  Olivella, born in Spain, shares his grandmother’s thrifty sweet cakes originally made with stale bread saturated in red wine. Daniel now lives in Austin, Texas where he operates Barlata Tapas Bar.

Rather than red wine syrup, David chose to roll his variation in sugar and then dip the tops in a cider syrup.  I passed on all that, since mine were plenty moist and sweet from the honey.   I also used smaller silicone molds, which hold about ¼ cup when filled, and less than a standard muffin cup. 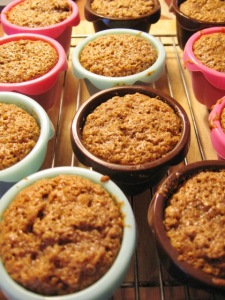 For a final touch of sparkle,  I lightly dipped the baby cake tops in turbinado sugar crystals—and called it good!

Inspired by David Lebovitz’s adaptation of Daniel Olivella’s version in Catalan Food: Culture and Flavors from the Mediterranean.

To serve:  Chef Olivella suggests serving with remaining syrup and a bit of crème fraiche, but as a snacking cake they are good on their own.  Store in airtight container at room temperature 4-5 days.  Yield:  about 12 cakes.