I don’t know about you, but I seem to constantly struggle with too many over-ripe bananas. After all these years, you’d think I would have figured out how to realistically manage the inflow and outflow of bananas.  Maybe a life-cycle chart would help.  Or perhaps there’s an app that can tell me when to buy more bananas.

Try as I might, I can’t quite get the purchase and consumption of bananas to come out even.  There are times at the market when I will hover over them, remind self of the likely outcome, then staunchly throw my head back and move on―empty handed.

Just as often though, I will linger over the bananas a tad too long. I’ll pick up a bunch and feel the surge of tension―I have more at home but I’m buying them anyway.  I refuse to accept that there will be dark bananas days ahead.

I tell myself past-their-prime bananas are good.  I should be grateful.

They are sweeter and more nutritious than their younger, firmer predecessors, especially in smoothies and other juice drinks.  We know they are richer in potassium, which helps with high blood pressure, osteoporosis and stroke; they have increased vitamin B-6 which lessens rheumatoid arthritis, depression and heart disease; and they contain plenty of soluble and insoluble fibers, helpful in preventing obesity and hypertension.

Nevertheless, those same youthful bananas continue to sit, gain spots, and grow black.  Likely as not, they will be relegated to the freezer, deferred for another day.  Recently, I was back in that same predicament: what to do with more sagging bananas. Here’s my latest solution for 2 (just) small very ripe bananas.  Good news: it continues to keep on giving for several days, long enough to stop buying bananas for a while.

This Banana Swirl Bread is inspired by Banana Cinnamon Bread at Goodeats.com.  It’s as close as you can get to easy banana-scented cinnamon rolls – but instead of the usual heavy dose of butter there’s only a dash of olive oil. 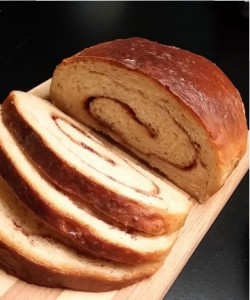 Like most yeast breads, there is the rising time to consider. The dough is so well constructed I didn’t even bother to pull out my mixer and opted to stir it up by hand.

Once it has risen the dough rolls out in a flash; it’s sprinkled with cinnamon-sugar and shaped into a loaf for another quick rise.

While the bread bakes, the air is filled with scents of tropical bananas and cinnamon―an unbeatable combination.  The hardest part is waiting for the bread to cool before cutting.  It slices beautifully revealing a gorgeous, pale yellow loaf etched throughout with a cinnamon-brown sugar spiral.

It is delicious sliced and eaten straight up, but there are those who will want to toast it and further glorify it with butter.  I suspect it would make amazing French toast, too. Stay tuned for Episode Two.