As recent as last week, had I been asked the likelihood of lentil loaf appearing in this blog, I would have responded, “Highly improbable.” In my mind, it conjured up a bland mass of boring shades of grey not worth pursuing.  Now, thanks to Giada De Laurentiis I can happily chalk that one up as an another, “Well, I was wrong.”

In defense of shades of grey, it’s safe to say that we’ve been given plenty of reason to reconsider what grey means, and that it doesn’t have to be dull and dreary. For me, all it took was a long look at Giada’s mother, Veronica’s recipe for lentil loaf.  Amidst the vegetables and vibrant Italian flavors there were lentils, but I saw color, taste, and plenty of potential. Could it be that these mild mannered lentils were a ruse, rather a rallying point for one raucous party?

So thank you, Giada, you certainly opened the door.  For the record, here’s Veronica’s version with spinach, cheeses, and rice−likely quite delicious.

Although our approaches are similar and it is all about layering and building flavors, I veered off on a slightly different tack. I started by simmering the lentils with a bit of bacon, celery, and a light seasoning of allspice; when the lentils were almost done I added carrot. For bulk and balance, I opted to include bulgur wheat rather than rice, for its nutritional qualities and ease of preparation. (It only needs a good 15-minute soak in boiling water.)  For the vegetable component, I sautéed onion and garlic in olive oil, added chopped portabella mushrooms seasoned with rosemary and thyme, and gave it a good squirt of lemon juice. Then, it’s all mixed together.

Much like preparing a meatloaf, the lentil mixture is combined with binder: quick oats, Parmesan and a couple of eggs. There’s a final seasoning of salt, pepper, a good shot of Worcestershire sauce and plenty of fresh parsley.  It needs a short rest to redistribute the moisture content and allow flavors to permeate and blend.

That gave me just enough time to preheat the oven and make a quick sauce.  Veronica tops her loaf with a fresh salsa of sorts. For contrast I wanted a saucier consistency; we already had plenty of texture.  Since the loaf only takes about 30 minutes, I could whip up an easy Marinara Sauce. 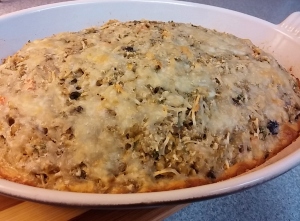 As with a fine roast, once it’s removed from the oven the loaf should rest a few minutes, then it will cut easily into firm green and orange speckled slices. The Marinara Sauce adds a shot of color, more moisture and vibrant flavor. 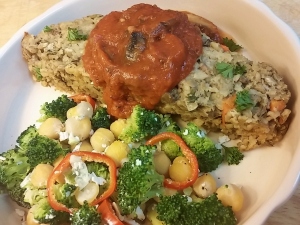 Best news: the following day it is even better−there’s nothing dull and boring about this lentil loaf.

Directions
1.  For the lentils: In small pot, place the lentils and bacon with 3 cups water.  Bring to a boil and skim any brown matter that surfaces to the top.  Add the celery, salt, pepper, allspice and simmer for 15 minutes.  Add the carrots and continue until lentils and carrots are tender, a total of 20-30 minutes.  Drain and set aside.
2.  Prepare the bulgur wheat: Soak the bulgur wheat in boiling water covered with plastic wrap, for 15 minutes, until the water is absorbed.
3.  Sauté the vegetables:  In medium skillet, heat the olive oil, add the onions and sauté to soften Add the mushrooms and toss to release moisture, add the garlic and herbs and continue cooking until moisture is released; season lightly with salt and red pepper flakes. Squeeze in lemon juice, sauté briefly to absorb and remove from heat.
4.  In a large bowl, combine the lentils, bulgur wheat, and the sautéed vegetables.  Add the oats, Parmesan cheese, parsley, Worcestershire, the beaten eggs, and salt and pepper.  Toss to blend well.  Let stand while oven is preheating..  Preheat oven to 350 degrees and coat a deep gratin dish or other large casserole with olive oil.
5.  Pack the lentil mixture into the prepared baking dish and round it on top.  Press bay leaves on top and sprinkle with mozzarella and Parmesan cheeses.  Bake for approximately 30 minutes until the top begins to brown.  Let stand 15 minutes before cutting into thick slices and serve with Marinara Sauce. Serves 6